Get fresh music recommendations delivered to your inbox every Friday.

by Gerrit Hatcher and Julian Kirshner 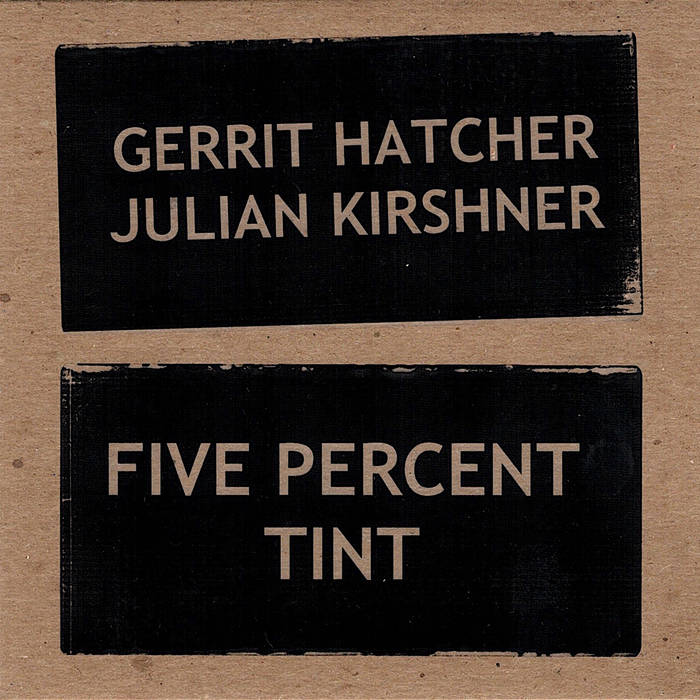 
Recorded by Todd A. Carter at bel_Air Sound Studio on October 24, 2017
Mixed and mastered by Bill Harris

"On the new self-released Five Percent Tint, Hatcher and drummer Julian Kirshner—part of an exciting new crop of players who've brought an electric energy to the local community in the last few years—engage in a driving, forward-motion attack, Kirshner issuing gruff, paint-peeling riffs and cycling licks with improvisational patterns that frequently veer into keening high-end cries. There are also moments of repose when he spreads objects across his kit—dragging, abrading, and dropping things to generate an intimate little mini-performance of texture—allowing the saxophonist to embrace a conversational flow, albeit one that eventually becomes extroverted and explosive."
- Peter Margasak, Chicago Reader

"Featuring Gerrit Hatcher on tenor sax and Julian Kirshner on drums. Chicago saxist Gerrit Hatcher just left us with a couple of new discs and I am most impressed, especially considering I hadn’t heard much about any of the musicians on either CD. Right from the gitgo, this duo combines forces and blasts freely and with tightly integrated lines. There is no info on this disc so I can’t tell you where or when it was recorded but the sound/balance is superb throughout. The first and perhaps most famous tenor sax & drums duo album was John Coltrane’s ‘Interstellar Space’. This duo sounds particularly inspired by this seminal recording (recorded in 1967) and do a great job of taking off from there. Instead of mostly fire-music, this duo like to lay back and simmer at times, providing a sublime sense of calm. I dig the way things build to an explosive series of crescendos, higher and higher each time. Mr. Hatcher does a fine job of holding onto and then bending certain notes, twisting them into different shapes while Mr. Kirshner provides and ongoing dialogue, speeding up, slowing down, the currents/pulse always moving together in a most organic way. Once again, Mr. Hatcher, provides us with another colossal contribution to free/jazz at its most incendiary and creative."
- Bruce Lee Gallanter, DMG


"Freewheeling duets in the best Chicago improv tradition – served up here by tenorist Gerrit Hatcher and drummer Julian Kirshner! Kirshner's got an amazing ability to focus on a percussion pattern and keep moving with great intensity – which provides a nice balance to the sharp tones of Hatcher on tenor – who really squeezes the reed, while also embracing the full range of the horn – providing these deeply expressive lines that burn strongly throughout. Julian also gets some interesting elements out of his drum kit at times – and although both of these guys are of a younger Chicago generation, we're guessing we'll be hearing plenty from them in years to come!"
- Dusty Groove

Bandcamp Daily  your guide to the world of Bandcamp

Little Brother joins the show to discuss their beautiful journey, plus tunes from Fat Tony