Get fresh music recommendations delivered to your inbox every Friday.

by J@K@L with Michaël Attias 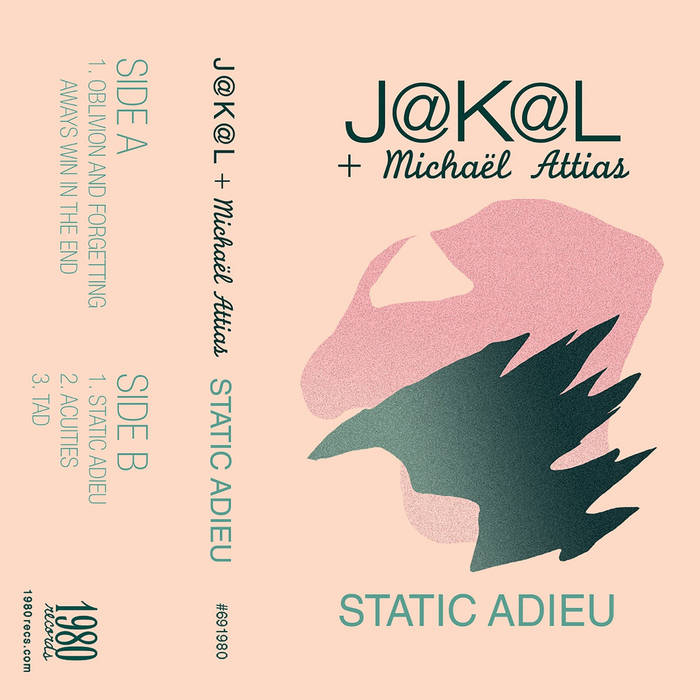 Originally released in 2016 as a limited-run cassette tape for 1980 Records. Now out of print, and available digitally for the first time.

Recorded live at The Owl in Chicago, IL on March 6, 2016
Recorded and mixed by David Zuchowski
Mastered by Fred Lonberg-Holm

Keefe Jackson (reeds), Julian Kirshner (drums), and Fred Lonberg-Holm (cello, tenor guitar) released a cassette last year called If Honor And Wisdom And Happiness Are Not For Me, Let Them Be For Others. The group has continued working together and is now referring to itself as J@K@L (Jackson@Kirshner@Lonberg-Holm). They have just released a second cassette of a live recording with special guest Michael Attias (alto sax), recorded in Chicago at the Owl in March of this year.

The first side of the cassette (a single track called “Oblivion and Forgetting Always Win in the End” - a title you can trust!) opens with the trio (Attias doesn't appear until Side B) charging out of the gate representing said shared Oblivion. By the 3-minute mark, however, they have gelled into something spectacular, speaking in tongues in praise of something pleasingly unholy. Fred is the guardian of all things electronic and skronk here, running his instruments through multiple effects; and his first challenger is Keefe Jackson's tenor sax. (Here's where the community spirit unravels and the battle commences.) Fred wins, so Keefe grabs his sopranino and immediately the intensity level goes up for the entire band. Fred is eventually driven back to his cello by an honest-to-God SPIT SOLO from Keefe. Jackson is not a good sportsman. He gloats over his victory by playing like a mountain man from Joujouka, bucking and squealing like a possessed Bou Jeloud, while Fred tries to drown him own with cello distortion & Kirshner runs referee. Final assessment: the listener wins.

Side B (@BYG Actuel, since this entire side struck me as an homage to vintage sides of this label) features Mr. Attias and Mr. Jackson frequently blurring the line between soloist/support/collaborative roles, keeping Fred and Julian on their toes throughout. On a section of the title track, Lonberg-Holm manages to play bass, lead, and alien wallpaper sounds simultaneously. Kirshner also takes a sublime drum break, followed by Sonny Sharrock's Monkey–Pockie–Boo band. (The follow-up track, “Acuities,” sounds more like Alan Silva's Luna Surface band. See? Total label tribute thing.) After hearing the first side, I figured the band would use Attias to really up the ante and push it over the cliff (like Dave Burrell's Echo), but nah – Attias' brilliant art of conversation brings about the best of all possible outcomes: communication.

Bandcamp Daily  your guide to the world of Bandcamp

Little Brother joins the show to discuss their beautiful journey, plus tunes from Fat Tony